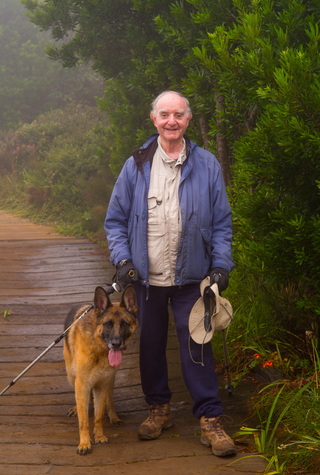 Bill Broder on trail with Sophie 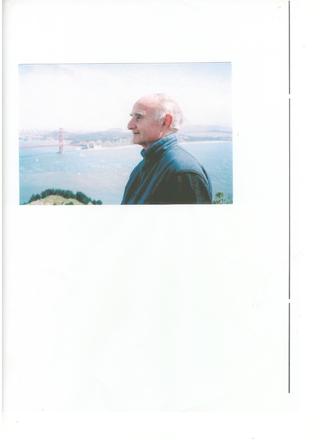 Broder combines a storyteller's delight in complicated predicaments with a painter's eye for landscape and body language, and a poet's sense of place. (Chicago Tribune)

Bill Broder was born and brought up in Detroit. He graduated from Columbia College, served in the Navy, and wrote and taught writing as a Teaching Assistant under Wallace Stegner and Richard Scowcroft at Stanford. Broder has published The Sacred Hoop, Sierra Club Books (1979 and paperback 1992); Remember This Time, written with his wife, Gloria Kurian Broder, Newmarket Press, 1983. His novel, Taking Care of Cleo, appeared in 2006, published by Handsel Books/Other Press. It was chosen as one of six fiction finalists in the Great Lakes Book Awards and was one of twenty books from all categories chosen as a Notable Book of 2007 by the Michigan Library Foundation. In 2011 Broder launched The Ainslie Street Project in order to publish further works. So far the following Ainslie Street Project books are available on-line, in libraries, and in selected bookstores: A Prayer for the Departed, A Memoir; The Thanksgiving Trilogy, three novels--Crimes of Innocence, Esau’s Mountain, and What Rough Beast?; Two Russian Bicycles, two novellas--Tolstoy's Wife and The Sphinx of Kiev; and three novels: Belief, A Novel; Six Hands Clapping; and The Teeth of God. His most recent works to appear: What Do We Do With Our Dead, A Meditation; A Man of No Rank;The Dramatists Guild Tides Theater event. His other plays have received staged readings in the Bay Area by Equity actors at the Upstart Stage, The Plays in Progress Series at A.C.T., The Western Stage Theater Company, the New Playwrights Festival, and New Visions Festival. Two of his plays were presented as staged readings at The Second and Third Annual California Studies Conference in Sacramento, California.

Professionally, Broder has worked extensively as a free-lance writer, specializing in the writing, design, and production of educational materials for museums, schools, exhibitions, and publishing companies. He formed a partnership with James Robertson, The Amazing Life Games Company, to design and produce early-learning materials for teachers and later, mathematics materials for early grades. These materials were published and marketed by Houghton Mifflin and Holt, Rinehart, Winston. Broder worked with Gordon Ashby Associates on the Coyote Point Museum of Environmental Education, The St. Supery Winery, and the Oakland Museum. He wrote the tour for the 150th Anniversary Exhibit of the Gold Rush at the Oakland Museum. He worked with Jane Clickman Design on the Calaverus Historical Museum and Archive, the Oakland California SPCA Adoption Center, and other projects. He also wrote, edited, and helped design four annual publications of the Sierra Club Almanac for Young People (poetry, images, natural facts, and experiments) (Scribners).

Gloria Kurian Broder (1927-2013)
Gloria Kurian Broder was born and raised in Detroit, Michigan with four sisters, who remained close for her lifetime. She received a BA from the University of Michigan, and an MA in English and Creative Writing from Stanford, University under Richard Scowcroft and Wallace Stegner. She lived in Sausalito for fifty-one years and, with her loving husband, brought up a daughter and a son there. She published stories in Harper’s, Ploughshares, Bellevue Literary Review, Literary Imagination, and other literary magazines. Her story, “Elena, Unfaithful,” was anthologized in “Great American Love Stories” (Little, Brown). She and her husband, Bill Broder, co-authored a novel, “Remember This Time” (Newmarket Press), based upon the experiences of her mother and aunts as teenagers in Russia during WWI and the Russian Revolution. Her book of short stories, “Their Magician and and Other Stories,” was published by Handsel Books/Other Press, NY, in 2005.
Gloria wrote fiction, because she loved to read fiction and believed in it as a form of truth. In her stories she attempted to reveal the humor, love, and tragedy of ordinary lives. Her favorite short story writers were Anton Chekhov, Isaac Babel, John Cheever, William Trevor, and Alice Munro.

With a combination of comic lightness and gravitas that may remind the reader of Chagall as of Chekhov and Cheever, Gloria Kurian Broder shows us what it is like to live in America's cities and suburbs, creating characters who, in the face of loss, self-doubt and others' skepticism and hostility, strive to keep alive the spirit within them.

A MAN OF NO RANK; The Memoir of a Storyteller

A Man of No Rank; The Memoir of a Storyteller. Story is the essence of the identity of every human being. At birth, we enter a story already made for us and until the story is shattered it is our destiny. Eventually, death, war, accident, bankruptcy or earthly disaster shatters our personal story and we must create a new one to give our lives meaning. This book is the chronicle of one man's progress out of his family's story, through various accidents of life to the meeting of a good woman who helped lead him to storytelling. Both the author and his wife did not come to their craft solely by accident. Very early, stories provided both solace and hope for them. They took refuge from the stresses of life in the wonder they found in a whole array of tales that arrived first in bedtime stories, then in books. They discovered the treasures of public libraries. Later magazines and even movies wove the mysteries of life into meaningful sequences. When they first met, they discovered that they admired the same sort of stories, followed by the realization that they admired the same sort of people, which is what good stories are about. It was then they devoted the rest of their lives to each other and to the craft. The remainder of the book narrates the arduous path the author took in his career as a fiction writer, a playwright, and a free-lance writer for institutions—schools, museums, and other spaces devoted to the education of the public. At the end of the book, the author's life-narrative is shattered by his wife's death. Once again, he must make up a new story—the story of living alone.

The text you type here will appear below the link

WHAT DO WE DO WITH OUR DEAD; A Meditation
An aged storyteller attempts to retrieve his beloved wife after her accidental fall and her journey through the dark corridors of American medical bureaucracy that led to her death. His quest continues as he confronts the onerous details involved in the administration of that death. To his surprise, the song of his lament turns joyful as he recalls their discovery of one another, the blossoming of their love, and the details of their happy life together. In the darkness of death and bright light of his memories, he slowly invents appropriate ceremonies to celebrate the woman who illuminated his life. His song only ends when he deposits her ashes and discovers that she remains alive within him.

The Teeth of God
THE TEETH OF GOD, a novel about the power and danger of imagination, proceeds on three levels that alternate throughout the work: (1) the life of Eugene Wolfe who practices dentistry in Northern California; (2) a play Eugene has written about Ramon San-Souillard, a California culture hero in search of his soul with the northern California Indians; (3) and the many gods—Christian, Jewish, and Native American--who squabble over the fate of Eugene and Ramon. Each level affects the other levels. The novel ranges in time from 1923 to the present and in place between Detroit, northern California, and Paris. Eugene identifies with Ramon’s wild rebellious spirit, qualities that have been sadly missing from Eugene’s life. Like Ramon, he attempts to find a true home and a soul in which he believes. Eugene’s quest casts his beloved wife Miranda and their three children adrift forcing them to rediscover the meaning of their lives. The inept gods interfere with the progress of the novel and affect the lives of all the characters.
Six Hands Clapping
Six Hands Clapping is a unique American family story depicting the recent rise of Zen Buddhism in the United States. The tale is told from the point of view of the children of two American-born Zen leaders. It is a story of love, utopian religious ideals, and human frailty that has been repeated in different forms on this continent since the landing at Plymouth. The novel begins when the mother invites her grown children to witness her suicide at her Women’s Meditation Center in the Yolla Bolly Wilderness of Mendocino County. The children narrate the family history in dramatic scenes as they journey from London, Brooklyn, and the battlefields of the Hindu Kush Mountains. We learn that their mother, like a good Samurai Zen woman, is determined to defeat her enemy, cancer, before it destroys her. As she awaits the arrival of her children, she completes the story of her marriage to their charismatic father, his serial seduction of his Buddhist followers, and the marital break-up..
Although the children have fled Buddhism, their lives have been profoundly altered by their parents’ practice. This final scene confirms the three most fundamental Buddhist principles of existence: impermanence, suffering, and not-self.
Belief, A Novel
BELIEF, A NOVEL a contemporary tale, portrays a man whose search for God and whose caregiving infuriates his family and friends. The hero’s spiritual and fleshly appetites are closely allied. He feels most connected to life and God during the act of loving and love-making. The lives of the women for whom he cares—wives, daughters, and lovers —unfold as they try to unravel the mystery that surrounds his initial plight. When the book opens, the hero is in a coma supposedly induced by a drunken fall on the edge of a swimming pool. In this state, he is the subject of a number of legal charges relating to his real-estate business, his abetting the flight of a fugitive Weatherperson, and his sexual activi- ties with underage boys and girls. The hero’s lawyer-daughter seeks the true cause of his injury and supposed crimes. The novel proceeds as a mystery story that tracks down the true criminals while revealing the life history of the hero and his family that has placed him at such risk.
The Thanksgiving Trilogy is now available at www.Amazon.com and www.Redroom.com in paperback, Kindle, or e-book form.
The Thanksgiving Trilogy exploits significant aspects of California: its vision of possibilities, its sense of exile and mobility, and its respect for the past -- aspects that have contributed greatly to the development of American culture as a whole. The personal dramas within these three novels are set firmly in the western coastal landscape of the continent.
The Sacred Hoop
Broder's "cycle of earth tales" is a tough and brilliant collection of fifteen short stories and fables . . .
Taking Care of Cleo
Set in Prohibition era Michigan,Taking Care of Cleo is a gripping novel about love, family... and bootlegging.

“Two Russian Bicycles” consists of two curiously related novellas prophetic of the future course of Russian and world history. Both, based on historical fact, reveal how the small battles of the hearth, friendship, and love shape history and underlie the effort to remain human in times bedeviled by a brutal destiny.

“Tolstoy’s Wife” depicts Sonya Tolstoy’s struggle for the love of her husband, Leo Tolstoy—a struggle intimately shaped by her belief in the values that inform Tolstoy’s great novels.

“The Sphynx of Kiev” focuses on the importance of Lenin's character and personal life in shaping the distinctive properties of the two Russian Revolutions at the beginning of the twentieth century.

A Prayer for the Departed
In his book, “A Prayer for the Departed: Tales of a Family through the Decades of the Last Century” (ISBN 1461138930), Bill Broder honors the elders of his family through a series of short stories. As the youngest son, he acts as witness to the lives of his parents, his uncles and his aunts – lives steeped in the rich mix of a secular America and Jewish belief and ritual.
Loading…}