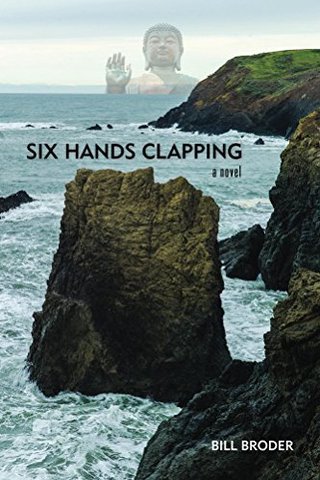 Six Hands Clapping is a unique American family story depicting the recent rise of Zen Buddhism in the United States. The tale is told from the point of view of the children of two American-born Zen leaders. It is a story of love, utopian religious ideals, and human frailty that has been repeated in different forms on this continent since the landing at Plymouth. The novel begins when the mother invites her grown children to witness her suicide at her Women’s Meditation Center in the Yolla Bolly Wilderness of Mendocino County. The children narrate the family history in dramatic scenes as they journey from London, Brooklyn, and the battlefields of the Hindu Kush Mountains. We learn that their mother, like a good Samurai Zen woman, is determined to defeat her enemy, cancer, before it destroys her. As she awaits the arrival of her children, she completes the story of her marriage to their charismatic father, his serial seduction of his Buddhist followers, and the marital break-up..
Although the children have fled Buddhism, their lives have been profoundly altered by their parents’ practice. This final scene confirms the three most fundamental Buddhist principles of existence: impermanence, suffering, and not-self.

The text you type here will appear below the link

A MAN OF NO RANK; The Memoir of a Storyteller
WHAT DO WE DO WITH OUR DEAD; A Meditation
The Thanksgiving Trilogy

The Thanksgiving Trilogy exploits significant aspects of California: its vision of possibilities, its sense of exile and mobility, and its respect for the past -- aspects that have contributed greatly to the development of American culture as a whole. The personal dramas within these three novels are set firmly in the western coastal landscape of the continent.

The Sacred Hoop
Broder's "cycle of earth tales" is a tough and brilliant collection of fifteen short stories and fables . . .
Taking Care of Cleo
Set in Prohibition era Michigan,Taking Care of Cleo is a gripping novel about love, family... and bootlegging.
The Teeth of God
Six Hands Clapping

What Do We Do With Our Dead?; A Meditation

“Two Russian Bicycles” consists of two curiously related novellas prophetic of the future course of Russian and world history. Both, based on historical fact, reveal how the small battles of the hearth, friendship, and love shape history and underlie the effort to remain human in times bedeviled by a brutal destiny.

“Tolstoy’s Wife” depicts Sonya Tolstoy’s struggle for the love of her husband, Leo Tolstoy—a struggle intimately shaped by her belief in the values that inform Tolstoy’s great novels.

“The Sphynx of Kiev” focuses on the importance of Lenin's character and personal life in shaping the distinctive properties of the two Russian Revolutions at the beginning of the twentieth century.

A Prayer for the Departed
In his book, “A Prayer for the Departed: Tales of a Family through the Decades of the Last Century” (ISBN 1461138930), Bill Broder honors the elders of his family through a series of short stories. As the youngest son, he acts as witness to the lives of his parents, his uncles and his aunts – lives steeped in the rich mix of a secular America and Jewish belief and ritual.
Loading…}